skip to main | skip to sidebar

This blog has moved!

Please go to my new Psychology Today blog to see what I'm up to. To buy the book, Bonobo Handshake, please visit my website. To follow the adventures of the Lola ya Bonobo orphans, please visit Friends of Bonobos

My hand will never be the same...

Today Coyumba raped my hand. We were doing the Ball Experiment, see post , and Coyumba is our champion ball thrower. He is, I'm afraid, better than all the bonobos put together. He really throws the ball back and he really wants you to play with him. Some scientists don't think it's possible for a chimp to be interested in objects like a ball in similar ways to a human child, but I think Coyumba is. i don't know if you can tell but he is my favourite chimp ever. 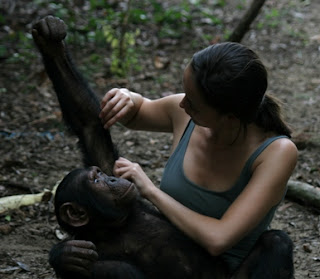 But during the interruption phase where I'm supposed to sit quietly with the ball within reach for 30 secs, Coyumba grabbed my hand and rubbed it vigorously on his erect penis.

It was such a bonobo behaviour I can understand how some researchers say that juvenile chimps and bonobos aren't that different in their sexual behaviour.

That's why I was interested in my bonking baby bonobo study, see post. Because I havne't tested the infant chimps yet, but I've spent a lot of time in orphan nursery groups and they don't fall about having sex whenever the food arrives.

so you'll recall these were the positions I predicted for bonobos: 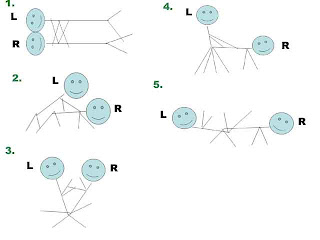 Well here they are in real life:

Position 5: Almost 69 (The most popular position, especially with the girls)

What most surprised me, was that I thought that young bonobos would have been taught their socio-sexual behaviours by their mothers or older bonobos in the group. But the nursery group are all orphans whose mothers were killed at a very young age and who have never lived with older bonobos.

So my preliminary conclusion would be that socio-sexual behaviour in bonobos is something that is present from a very young age, and dare I say it - a genetic predisposition. While Im sure that the enviroment in some way shapes the sexual behavior of the bonobos as they age, the presence of all this sociosexual behavior in young infants suggest that its something pretty tightly controled by their genes.

I haven't yet done the nursery chimps, but I doubt I'll see even one version of the bonobo karma sutra during feeding time.
Posted by Vanessa Woods at 7:15 PM

Vanessa Woods
Vanessa Woods is a bonobo researcher and a writer. Visit her website at www.vanessawoods.net 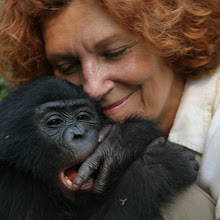 Lola ya Bonobo was founded by Claudine Andre